In the last of a long and loud chorus of concern for the MBTA’s draconian service cuts and drastic fare increases, today is the last opportunity for members of the public to testify or comment formally on the MBTA’s proposals. If you have concerns, take a moment to share them. Some of us use the MBTA regularly, but all of us need it.

Tonight’s public hearing is the final in a series of more than 30. It will be held in the Brighton neighborhood of Boston. To find more details about that event, click here. 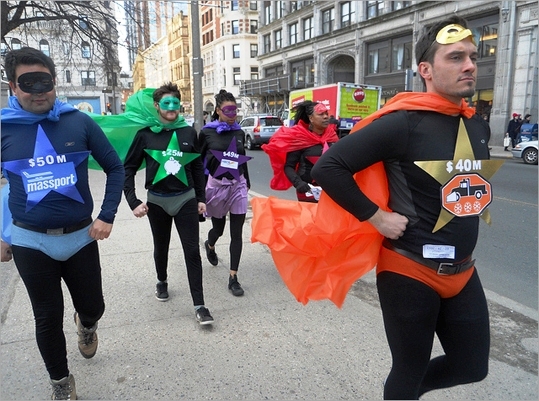 CLF is not alone in expressing its concerns about the proposed draconian service cuts and drastic fare increases. According to an article in Boston.com, “An agency spokesman says about 5,800 people have attended the public hearings over the past two months.” So popular have the events been that superheroes have attended (see photo on right). Similarly, the T has so far received 4,800 emails from customers.

To join in this chorus, you can do a few things:

Once all the comments have been collected, the T will review comments and then make a final recommendation to its board. These recommendations are expected by April 15, the deadline for approval of a new budget for the transit system.