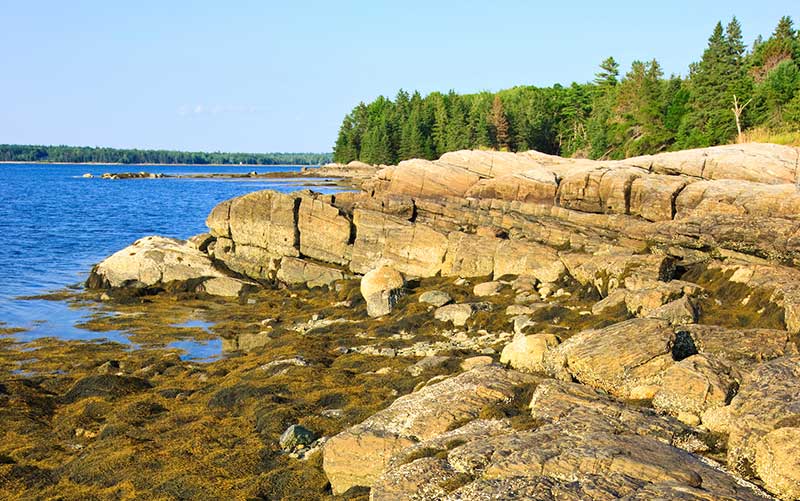 Rockweed drapes the shoreline up and down Maine's Downeast coast, providing valuable habitat for young lobsters, crabs, mussels, periwinkles, and more. It's now at the center of a battle over who has the right to harvest it on private land. Photo: EcoPhotography CLF is urging the Maine Supreme Judicial Court to consider rockweed’s value as habitat in its deliberations over who has the right harvest the commercially lucrative seaweed. Photo: EcoPhotography

If you’ve spent any time along the Downeast Maine coast, then you’ve encountered rockweed. The green-brown seaweed known officially as Ascophyllum nodosum is ubiquitous here. At low tide, it carpets the rocky coastline and provides a refuge from the heat or the cold for a variety of shellfish and crustaceans, including juvenile lobsters, crabs, mussels, and periwinkles. At high tide, it’s a shelter and food source for other commercially important fish, shellfish, and crustaceans, such as juvenile cod and bait fish.

Rockweed also has commercial value in and of itself, primarily as an additive for the food and drug industry as well as products such as fertlizer and cosmetics. Over the last decade, that value has grown, resulting in ever-increasing amounts of it being harvested from Maine’s beaches.

As harvesters have become more common sights along shorelines, the issue of who owns rockweed – and thus has the right to harvest it – has become a contentious one. Coastal landowners object to harvesting methods, while companies claim that those methods are protected under the law. The Maine Supreme Judicial Court has taken up the dispute and is expected to make a decision by the end of this year.

What’s at risk of being forgotten in the dispute, however, is the value of rockweed as habitat. New England’s ocean is changing, becoming warmer and more acidic due to climate change. That makes protecting critical habitat for Maine’s coastal fisheries a  priority, one that the Court should consider in its deliberations.

The dispute centers around the common law rights established in colonial days for the public to “fish, fowl, or navigate” in the intertidal zone, the area of beach exposed between low tide and high tide. If cutting rockweed from the rocks to which it attaches itself is not fishing, fowling, or navigating, then the rockweed is owned by the coastal landowners and cannot be removed without their permission. This same standard applies to rocks or sand in the intertidal zone, which can only be removed with the landowner’s agreement (and permits from state agencies).

However, if the Supreme Judicial Court finds that harvesting rockweed does constitute fishing, then coastal landowners will have no say in the manner and extent of that harvesting. Regulation will rest solely with the Maine Department of Marine Fisheries – which is in no position to undertake such regulation given that it is woefully understaffed and under-resourced.

We at CLF have been following the development of this dispute, and we are urging the Court to consider another factor in its deliberations: the enormous habitat value of rockweed. In a friend of the court brief filed recently, we argue that the plain meaning of the common law right to “fish, fowl, or navigate” does not include the right to cut and remove rockweed.

Instead, we believe that this important habitat should be managed in concert with all stakeholders: coastal landowners, commercial harvesters, and the Department of Marine Fisheries. They should together identify the most appropriate areas along the coast to harvest as well as the methods by which harvesting is conducted. Cobscook Bay provides an example of this “three-legged stool” approach, in a management plan for rockweed harvesting that marries the interests of people and wildlife.

CLF is joined by a number of other organizations, such as Maine Coast Heritage Trust, in taking this position, and is actively pursuing supporting such an approach outside of the litigation process.

Economic Growth and Climate Resilience Can Go Hand in Hand

Ultimately, the growth of one coastal industry should not harm another – especially at a time when we need to strengthen and fortify our coastal economy against the impacts of climate change. Rockweed harvesting is an exciting and growing venture in Maine, but it must be managed in concert with current economic and environmental needs to ensure long-term sustainability for all.