Skip to content
Home  /  Blog  /  Why Are We Here Again? Standing with Springfield Against Biomass 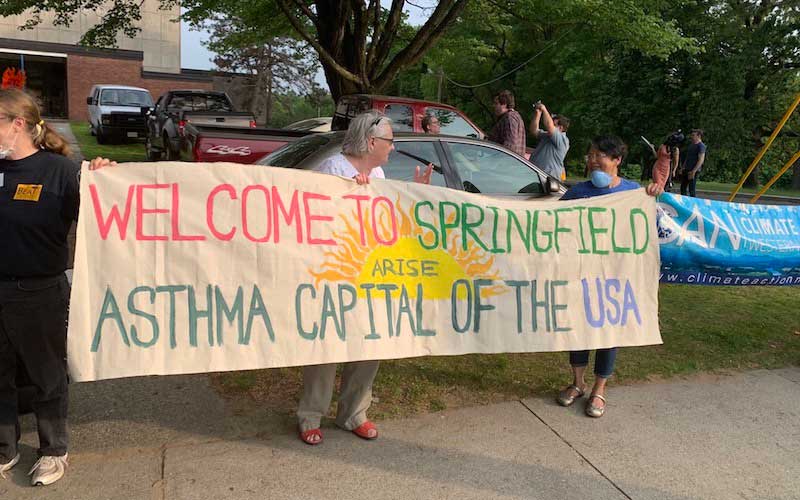 A snapshot of the demonstration against the proposed biomass plant in Springfield. Photo Credit: Rohemir Ramírez

It’s Wednesday afternoon at the John J. Duggan Academy Auditorium in Springfield, Massachusetts. Hundreds of local residents are gathered here, many waving handmade signs outside and urging passing drivers to honk in support of their demonstration. What are they protesting? Changes to a Massachusetts clean energy policy that would pave the way for a new biomass power plant in town.

Inside on the stage sit four men in dark suits, representatives of the Massachusetts Department of Energy Resources, the agency tasked with reviewing and approving the policy change. One by one, local residents step up to the microphone to voice their concerns. The overwhelming sentiment: This policy change and this plant would be bad news for a community already overburdened with air pollution.

Springfield, alongside community and environmental organizations like CLF, has been fighting this proposed biomass plant for years. We set aside the fight in 2017 when Palmer Renewable Energy, the company behind the proposal, paused its plans for construction. At the time, Palmer just couldn’t be sure its plant would be profitable because the state’s clean energy policy didn’t classify its power as clean energy. But now the company is back, hoping that its efforts to weaken state policy will bring its proposal back to life.

We’ve Fought This Biomass Plant Before

If this all sounds a little too familiar, it’s because it is. Palmer Renewable Energy first proposed its 35-megawatt biomass energy plant in East Springfield 10 years ago. Since then, residents and local environmental organizations have opposed its construction. We knew the plant would only increase air pollution in a city already burdened by poor air quality issues.

After years of legal battles spearheaded by the community-based organization Arise for Social Justice, Toxics Action Center, and CLF, the biomass plant’s construction was delayed and dormant for more than two years. That is, until late 2018, when Palmer stated publicly that it would break ground the following spring.

Within six months of Palmer’s announcement, the Massachusetts Department of Energy Resources made one of its own: It plans to roll back a critical environmental and health policy that protects the public against inefficient woody-biomass plants. The company behind Palmer had, in fact, requested many of these specific policy changes when they first proposed their plant. Weakening these protections will make Palmer’s plant eligible for lucrative energy incentives that are out of its reach under the current, stricter policy. In other words, it will become more profitable for Palmer to pollute.

CLF and others fought hard for these policy protections in 2012. Together, we helped to ensure that Massachusetts’s Renewable Portfolio Standard (RPS)—a state program that requires the Commonwealth’s electricity to be generated from renewable energy sources—only includes low-emission, sustainable biomass.

Weakening this standard has implications in Springfield and beyond, including increasing carbon pollution and worsening air pollution.

This Plant Would Harm Massachusetts Families

This brings us back to that afternoon in Springfield. Palmer hasn’t yet broken ground, and the message from the community is clear: No means no. No to the changes in the RPS and no to a biomass plant in their neighborhood. The reasons are simple. First, the proposed change would increase Massachusetts’s climate-damaging emissions at a time when scientists are telling us we need to slash emissions urgently. Second, they would harm communities where air pollution is already a significant health hazard.

Springfield is an environmental justice community and struggles with the health problems linked with hazardous air pollution. The Asthma and Allergy Foundation has ranked the community as the Asthma Capital of the United States for the past two years. This means that just by living in Springfield, a city with a large proportion of low-income residents and residents of color, you’re significantly more likely to develop this disease. Currently, almost one in five children in the city have been diagnosed with pediatric asthma – more than double the national rate.

Palmer’s proposed biomass plant would make this worse. It would be a significant new source of particulate matter and other dangerous pollutants including heavy metals and carcinogens. This means more soot, smoke, and other pollution breathed in by children, the elderly, and everyone in between – day after day, 365 days a year. Such exposure only makes it more likely that residents will develop serious health issues. As Michaelann Bewsee, a local activist and former director of Arise for Social Justice, has said: “With ever-increasing traffic pollution, nearby power plants, and the Covanta garbage incinerator, the last thing [Springfield] needs is another polluting power plant.”

CLF is Standing with Springfield to Oppose the Palmer Biomass Plant

This is why CLF has partnered once again with Arise for Social Justice, Toxics Action Center, Springfield residents, and other environmental organizations. Together we oppose the construction of this unnecessary biomass plant and are working to prevent the rollback of critical environmental and health protections.

Weakening these protections would not just mean opening the door for Palmer to build a polluting power plant, but also paving the way for others to do the same in communities across the state. By stopping the Department of Energy Resources from weakening the RPS, we can help ensure that dirty plants like this one are never built in Massachusetts.

Communities overburdened by poor air quality should never be considered as a location for power plants that make air quality worse. Like the local residents in the auditorium, CLF says no to the changes in the RPS and no to a biomass plant in Springfield.