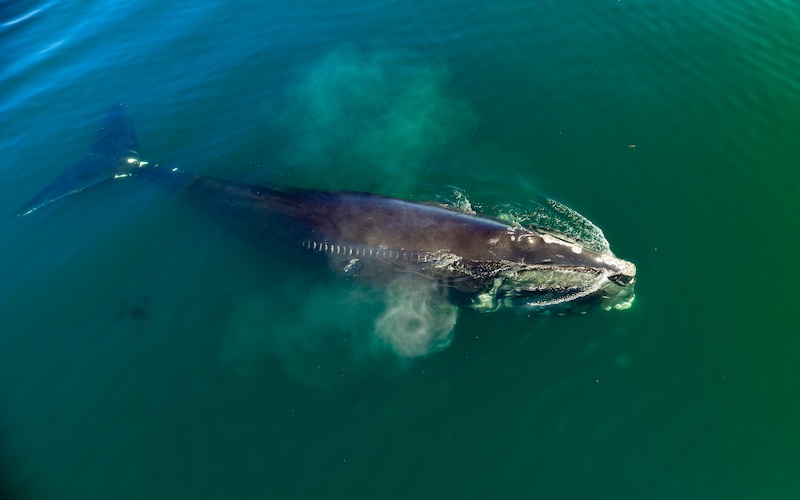 September 10, 2021 (BOSTON, MA) — The Center for Biological Diversity, Conservation Law Foundation, and Defenders of Wildlife have filed an updated lawsuit against the National Marine Fisheries Service for failing to prevent critically endangered North Atlantic right whales from getting tangled up and killed in lobster gear.

Entanglement in commercial fishing gear is the leading cause of death for right whales. Fewer than 360 of these whales remain.

The Fisheries Service issued a new rule on Aug. 31 to reduce entanglement risk in the lobster fishery. Yet the agency admits U.S. fisheries will nonetheless continue to entangle more than 9% of the right whale population each year, or roughly 32 right whales a year based on the current population. The agency estimates that these entanglements will result in the death or serious (i.e., likely lethal) injury of more than three right whales each year.

“Fishermen should be recognized for the changes they have made to protect right whales from extinction, but we have much more work to do,” said Erica Fuller, senior attorney at Conservation Law Foundation. “The existence of an entire species is at stake, and we must keep pressing forward. Fishery managers must take immediate action to reduce entanglements and we look forward to standing up for right whales in court to make sure they do.”

The updated lawsuit adds claims alleging that the agency’s new rule violates the Marine Mammal Protection Act by failing to reduce the risk that right whales will die in lobster lines to the low levels required by the statute. The lawsuit also challenges the Fisheries Service’s decades-long failure to comply with the act’s directive to reduce right whale mortality in commercial fishing gear to “insignificant levels.” It further says the agency’s assessment of how the lobster fishery affects right whales, called a biological opinion, fails to comply with the Endangered Species Act.

“The Fisheries Service continues to do too little, too late to reverse the right whale’s slide towards extinction,” said Jane Davenport, senior attorney at Defenders of Wildlife. “Even after our court victory in 2020, the agency committed the same legal error again, blatantly disregarding its obligations to protect and recover this iconic species. We have no choice but to go back to court to force the agency to do its job.”

When right whales get tangled in fishing gear, they can drown immediately or die over an extended period from injuries, infections, or starvation. Even nonfatal entanglements also sap whales of strength and decrease reproductive success. Chronic entanglements in heavy gear are a drain to a whale’s energy — so much so that it now takes females nearly 10 years between births to have another calf.

This critically endangered whale population has been declining since 2010, suffering an estimated average of 20 deaths and serious injuries per year. The unusual mortality event declared in 2017 is now entering its fifth straight year.

Conservation groups originally filed suit in federal court in Washington, D.C., in early 2018. In April 2020, the groups won a ruling that the Fisheries Service’s prior biological opinion on the lobster fishery violated the Endangered Species Act. Per court order, the agency had until May 31, 2021, to finalize a new biological opinion.